At the recent Flash Fiction Festival in Bristol, I had the pleasure of co-presenting a short workshop with the writer Carrie Etter about the relationship between flash fiction and prose poetry. It’s a topic that fascinates me – two forms that are close to my heart. During our presentation, we talked about some of their differences, some of their connections. Carrie Etter, for her ‘Sudden Prose’ undergraduate module at Bath Spa University, draws a very clear line in the sand between the two forms. That line helps her students write better prose poems and better flash fictions, knowing what’s expected of each form. I was interested to find out, in recent conversations, that from the start Carrie knows whether a piece of her own writing is going to be a poem, a prose poem, or a flash fiction, something that speaks of a clarity of process to be marvelled at. By contrast, I often don’t know – pieces go back and forth between prose and verse, are imagined in different contexts for different purposes. I find I’m often writing pieces that exist in a fuzzy, grey area in-between story and prose poem, deliberately ambiguous about their identity, reluctant to define themselves.

I’m not alone in this. Some useful and relevant links and quotes by writers defining prose poetry and flash fiction can be found at the Page Chatter website. For example, this by the American writer Denise Duhamel: “Prose poetry and flash fiction are kissing cousins. They are kissing on Jerry Springer, knowing they’re cousins, and screaming “So what?” as the audience hisses.”

Here is an extract from what I said at the joint workshop, in which I put forward an idea that Flash Fiction is at the mid-point of a Venn diagram of two overlapping circles that can be labelled Short-Short Story and Prose Poetry:

“I think of the relationship between flash fiction and prose poetry being a bit like a Venn diagram of two overlapping circles. At the extreme on one side you have a short-short story with a beginning, middle and end, one, two or perhaps three characters, conflict and briefly rising action towards a crisis with a resolution. And on the other side prose poetry, at its extreme it’s revelling in the play of the language, the music of the sentences, there’s no story as such, it’s maybe more about an idea or has some philosophical purpose or it’s provoking a feeling or mood. It may demand you to read it several times before you can extract everything from it.

“And in the middle of the Venn diagram you have this huge overlapping area of the two circles where you can’t tell what it is – there might be a character, something might happen, but may not, the language is beautiful or noteworthy, but probably quite accessible, there’s music in the shape of the sentences, and you don’t know how to categorise it but you know you really like the writing, whatever it is. Here I find Louis Jenkins, Ian Seed, pieces by Tania Hershman and Meg Pokrass, pieces from Robert Scotellaro’s Bad Motel, Russell Edson, Simon Armitage’s Seeing Stars, Max Porter’s Grief is the Thing with Feathers, parts of The House on Mango Street, parts of Baudelaire’s Paris Spleen, Vanessa Gebbie’sEd’s Wife and Other Creatures and so on.

In this Venn diagram, for me, flash fiction includes the possibility of prose poetry, whereas the short-short story does not.”

When aiming to publish in magazines, nowadays I often avoid labelling submissions as prose poems or flash fictions (because some editors don’t like one or the other!) and just call them “pieces”, leaving it to the editor(s) to decide. There are magazines such as Ambit, Stand, Under the Radar, The Frogmore Papers, Prole, Brittle Star, and Ink, Sweat and Tears that publish both poetry and stories, and I’m hopefully not wildly wrong in my impression that editors at these magazines seem more likely to tolerate stories that are closer to prose poems (and prose poems that are closer to stories). Quite a few of these magazines don’t use the Submittable system, so you don’t have to identify an online submission through a particular genre / form pathway (as many of you will have found, magazines using Submittable often filter their story and poetry submissions separately).

Something that does, for me, identify a piece as a flash fiction, is that it foregrounds a character, or maybe more than one. Whereas a pure prose poem, typically, foregrounds language, calls attention to itself as language. But there is much writing that foregrounds both character and language. So how else can we sift between the two forms?

Paraphrasing Charles Simic, for me there’s something about a poem that demands that it be re-read for it to work. A poem or prose poem demands a kind of double-take, builds a double-exposure into the reading experience. For me, that means that there’s some enigma at the heart of a prose poem, some sense of mystery to be savoured. It’s certainly not a story with a plot that resolves. Something remains unexplained on first reading, and must be lingered over, even at the risk of not being easily or immediately grasped. This degree of mystery, of lingering double-exposure, might correlate to the degree to which something is a prose poem rather than a flash fiction.

Some of the “pieces” in Three Men on the Edge were originally published as prose poems in poetry magazines. I’d suggest that the longer form of the novella-in-flash, especially, allows scope for individual pieces where the focus is music, image, metaphor, or description rather than story, allowing “narrative” to accumulate more gradually – rather than requiring it from every chapter. (Although many other novellas-in-flash that I love are deliberately novel-like in style throughout, consistently foregrounding the narration or the events / plot.)

The twelve-part sequence ‘The Invisible World’ in the middle of Three Men on the Edge focuses on a character grieving a death, but there is very little action in this section. I wanted to try a different approach to character, relying on description, symbol, metaphor, and the atmospheres of landscapes to suggest states of mind. At the end of this post is one piece (prose poem? flash fiction?) from this sequence.

Hybridity is built in to the DNA of the novel-/novella-in-flash, and I love the diversity of the works that appear under its label, from Kelcey Parker’s Liliane’s Balcony, to Alex Garland’s Coma, to Heather Cousins’s Something in the Potato Room, which range significantly in how plot-driven they are, or how closely they resemble something like poetry. For me, this diversity is part of the reason that the novella-in-flash form is so vibrant, and why it has a bright future.

You can find out more about Three Men on the Edge here.

His wife’s voice accompanying him, he circles the lake, breezes dragging shadows over the surface.

The water is troubled by a motorboat; waves lap at the land’s edge, nudging rotten branches lodged in the dregs of leaves, pulling, calling them back.

Honour me now I’m gone – companionship’s the cure. Don’t fashion yourself an abyss, don’t spiral within.

Sailors scurry across the lake, answering the winds. One dinghy flips, the pilot disappears beneath, only – as the vessel spins – to emerge, breathless, hugging the upturned keel. 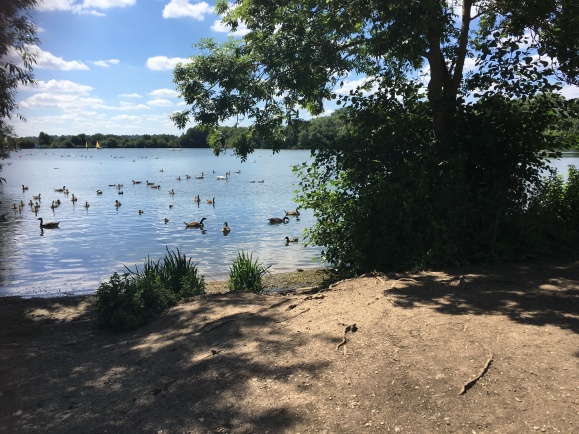 Really interesting article Mike. I’m familiar with the lines in the sand drawn by Carrie Etter, but you explore the edgelands of where they overlap and in away that is accessible. I’m not sure how I will translate this into action, but useful to have at hand to refer to.

Only just seen your comment here Rachael! WordPress hadn’t notified me. Glad you found it interesting. In terms of “action”, your “I’m not sure” feels accurate – I’d agree that it’s hard to “apply” theory about form when developing a piece. Sometimes for me it helps, in hindsight, in the editing phase, to think about whether I want to emphasise “idea” or “vocabulary / register / imagery” or “emotive appeal” (towards a prose poem?) or instead “character” or “story” (towards a flash fiction?). We write the things and then nudge them in different directions, teasing out aspects of style and form. Often, for me, it will depend on what the content is about – if it’s a piece that will fit in a future poetry collection (because the subject matter is shared by several verse poems in a particular manuscript I’m working on), I may nudge the piece towards feeling more like a prose poem so it can fit better in that manuscript; if it fits the themes of a flash fiction manuscript, then I might beef up the sense of “story” or “character”. There are lots of other good links here: https://pagechatter.org/essays/

[…] In part one, I considered some shared – and also distinguishing – features between prose poems and flash as forms. There is another similarity that I’ve not yet mentioned. Like poetry, flash can occur in sequences which build to pamphlet or book-length, such as Michael Loveday’s Saboteur Award 2019 shortlisted flash fiction novella Three Men on the Edge (V. Press, 2018). The wider potential parallels between flash and prose poetry can be seen in the fact that some of these pieces were previously published by poetry journals as well as those featured in flash fiction journals. He writes more about this and the overlap/intersection of prose poetry and flash here: https://michaelloveday.com/2018/08/11/prose-poetry-flash-fiction-and-venn-diagrams/. […]

[…] style. Crossovers between poetry and flash fiction are, therefore, only natural. English writer Michael Loveday has closely analyzed the overlap between the two. As he puts […]