My poetry pamphlet He Said / She Said [Link to Pamphlet], was published by HappenStance Press in 2011. It describes a faltering relationship between two people of different nationalities, exploring questions of love and loss, language, culture, and ‘otherness’.

“While the poems range from prose poems to translations and lyrics, they are all connected by a percipient ear and a socio-linguistic fascination…There is a love of language here, from tittle-tattle overheard, childish speech in ‘Big Mike’ with its endless conjunctives and adjuncts, to the morology of old age (“get me that drink of cabbage”) and the Augustan tones of the closing, masterly rendering of Virgil’s Aeneid…. There is an elegiac thread running through the collection and a poignancy when the speaker recalls how his own lingua franca has been enriched with words borrowed from other cultures…These poems fizz and sparkle with life.” (Richie McCaffery, Sphinx, December 2011) 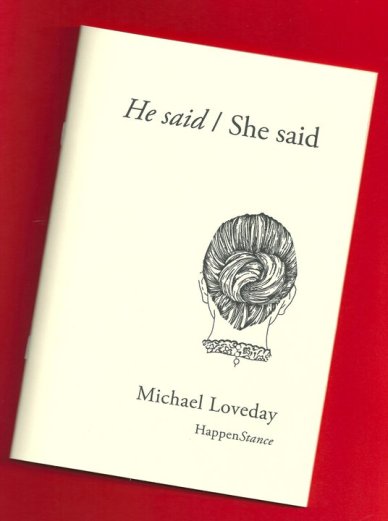 “He Said / She Said by Michael Loveday… mixes formal inventiveness with lyricism. Exploring love and loss, this HappenStance pamphlet moves from concrete poetry to prose poems via more traditional lyric forms and features a strong recognition of the limits of language… As a Polish / English relationship develops words from one language seed into another, but the conversation remains in the gaps; what is heard is not what is said and love and estrangement mingle poignantly.” (Jan Fortune, Envoi magazine, issue 167, June 2014)